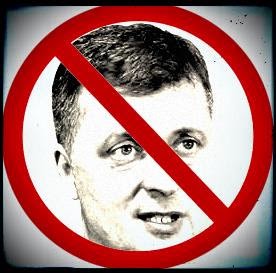 Meanwhile writing the first part of the report I’ve already known we will have to write about it again. We introduced you a lot of names and events already happened before the start of our championship. So Hungarian League started let’s see what’s happening right now.

(Julian Jenner, explayer of Ferencváros who were forced to leave.) 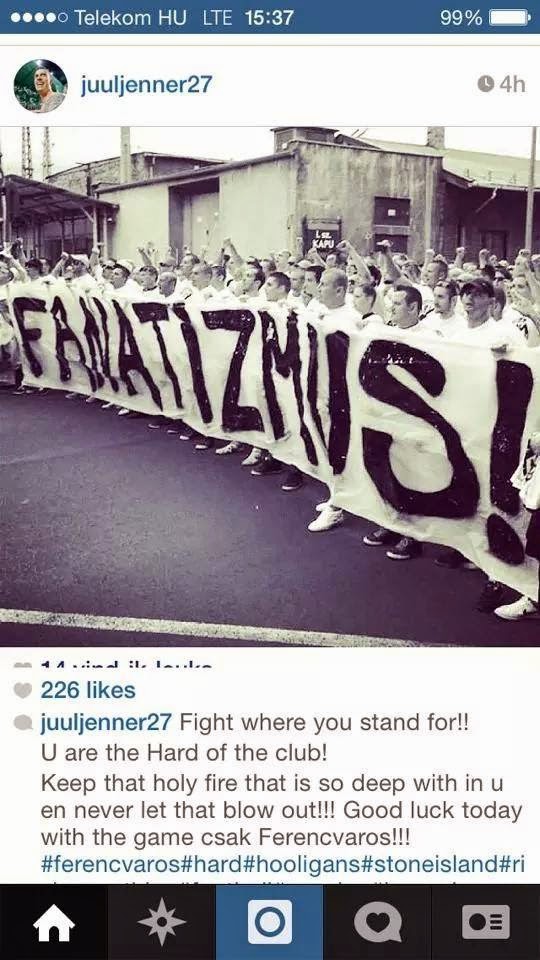 Kispest Honvéd – Dunaújváros, first round. „Ultras are not criminals” banner was taken of by security. Hemingway (hungarian-american owner of the club) ordered to take off the banner.

Ferencváros played their first game in Kecskemét, they got 1500 tickets but „thanks” to the friendly actions by the club only 800 of the supporters could attend the game. First time for Ferencváros not having a full away sector int he opening of our championship. Tickets could be bought only with the new registration cards.

Later Kubatov (President of Ferencvaros) said only the first three games will be avaible with the old cards, later everybody must have the new one. Leadership of the security got 15 000 euro for defending Kubatov’s name, support the team and create a new ultra group.

(Family friendly security with multiple body search which is illegal according to the rules of Hungarian Football League.) 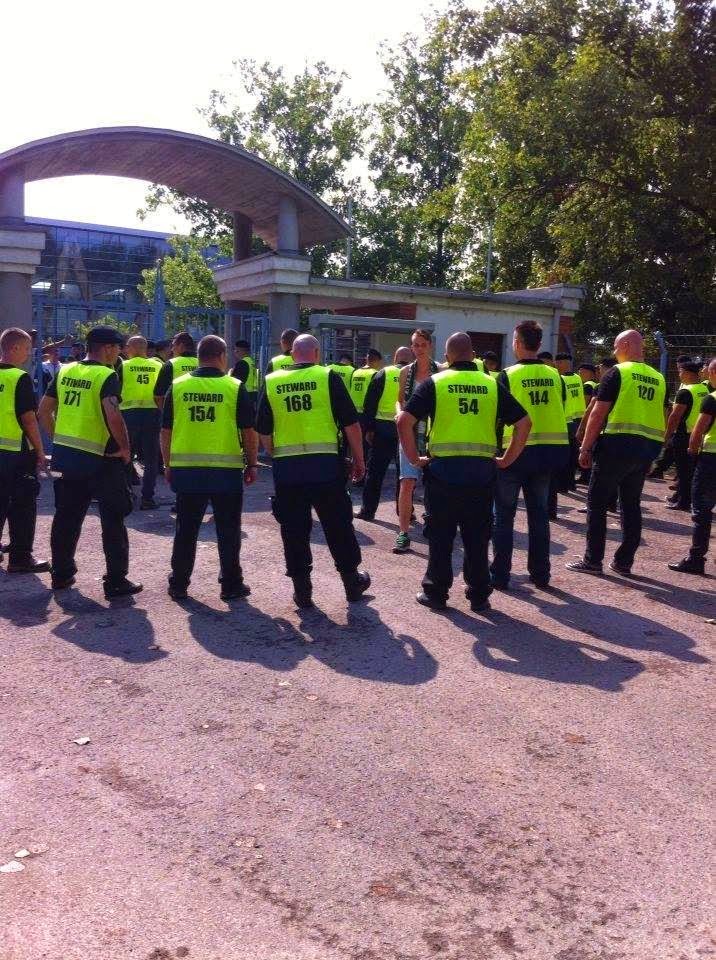 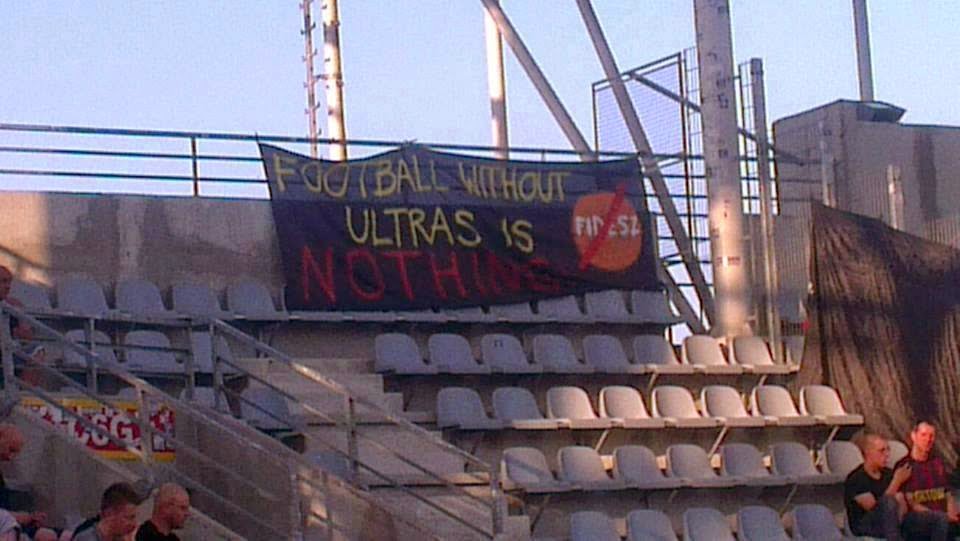 Co-founder of FradiMedia also left the management of Ferencvaros because of its politics against the ultras. Respect.

So the new stadium opened.

Szurkolóhang = supporters’ voice. From the voice technics with only one button the voice of supporters will be played. Ferencvaros supporters group (B-Közép, name of the sector) existing since 1928, it is the most disrespectful thing we can imagine.

New feature of the stadium. Supporting from computer! There are no supporters, the sound was coming from the stadium’s system! 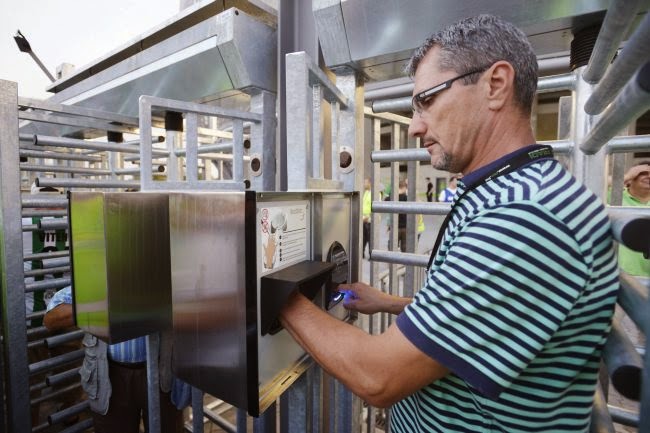 That’s how you enter the stadium.

We mostly speak about Ferencvaros, but for example Kispest is fighting with their owner for years and everybody has to register himself in every football club. So it started with Ferencváros but we suffer it all.

Videoton – Győri ETO
The groups and the leadership of the club had communication disagrement so they couldn’t coordinate it with the club. Security took away 500 kgs of confetti without question so the choreo could not be shown.

Official opening of the stadium were getting closer against Chelsea. Many supporters boycotted because of the card system much more because of the high ticket prices. On August 10th the stadium opened but there was no full house which is a shame for the leadership of Ferencvaros. All of there choices (both the high prices and the new security system) was against the supporters. At the end to have the full house they sold the tickets on half price or gave it as a present for many companies.

Ont he same day Ferencvaros supporters made a friendly game with Rapid Wien fanatics. The atmosphere was fantastic I think it is showing the difference between real football and modern football.

First away game was against Győr where 1100 Ferencváros fan arrived but the security took the choreography of Ferencvaros (Supporters without privacy).

Meanwhile in Pécs, the owner introduced the new registration card because of his club’s ultras political views (they were the most active supporters of Palestine in hungarian ultras’ movement). So Pécs had the new card system and int he ultra sector ticket prices were rised. Since that ultras of Pécs are boycotting (they have a pretty active scene in hungarian ustawka, arranged fight movement).

Ont he first game Ferenvaros were already boycotting and the new group financed by the president of Ferencvaros showed up. The new capo was paid by the president who did not even know the songs so he had it printed. Shameful. 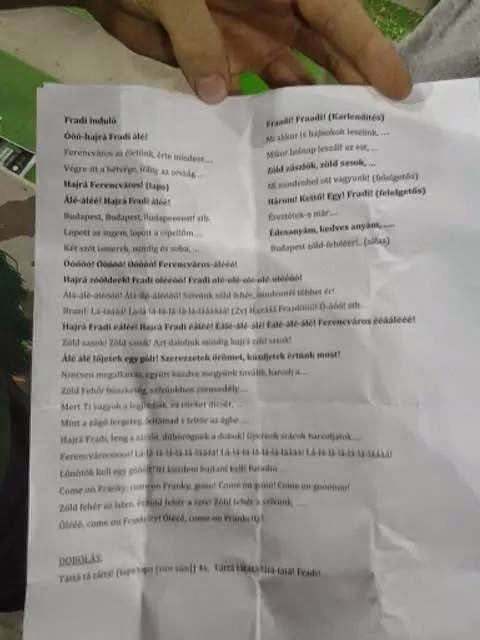 For the record let me tell you a couple things about the first home game. The ultras of Ferencváros were protesting as you can see but many other simple fans were there. The songs did not work without the ultras, a handful supporters of Nyíregyháza were more loud. Whole stadium chant only when they sang about Újpest and Nyíregyháza, when they scolded. Of course MLSZ (Hungarian Football League) could not say that all of their efforts did not work. So even the stadium was loud from obscene chants they did not have any kind of fines. Interesting if you ask me. When Nyíregyháza ultras chant against the president of Ferencvaros and supported the real ultras of Fradi the crowd yelled them over.

Ont he next home game papers were given to everybody who did not know the songs (with the text of the songs on them).

Újpest – Kispest, another derby of Budapest. Where MLSZ manipulated a video which were uploaded to their site. They changed the original sound of it so they could show ultras in a negative role. However a lot of us recognized it, MLSZ tried to delete the video but it was already out.

So came the Eternal derby, Ferencvaros against MTK with only 900 viewers which is the lowest number int he history of this derby. Many supporters were not allowed into the stadium because they did not come with the rest of supporters, they did not use the official meeting point and did not come with security escort. However a group of 8 men could attend the game and tried to take off the „B-Közép 1928” banner which is used by paid supporters of Kubatov. The security went int o help their paid supporters, the leader of the security attacked one of the real ultras. Another one threated them with stabbing. After the incident two steward was arrested! (Don’t forget the part one, most of them criminals, killers, bouncers…)

There was not a single day when somebody did not have a call from police, etc. Meanwhile supporters were banned from games in a 4th league team, Komló.

Banning also started at Ferencvaros, the capo and 12 other members had a two year long ban with checks of one million forints. 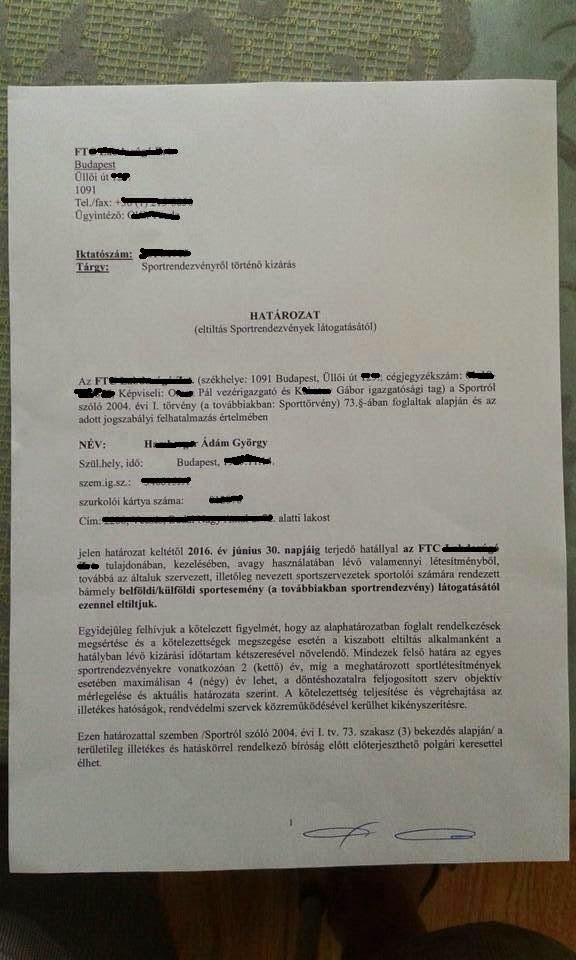 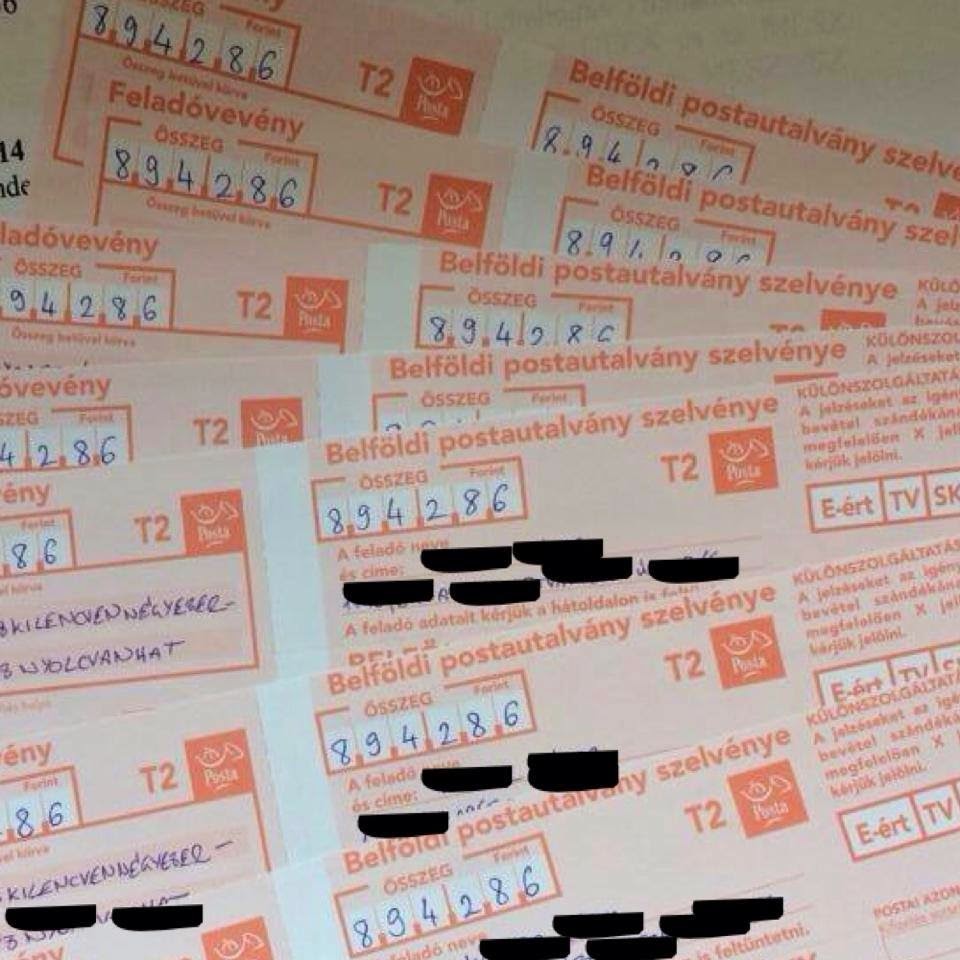 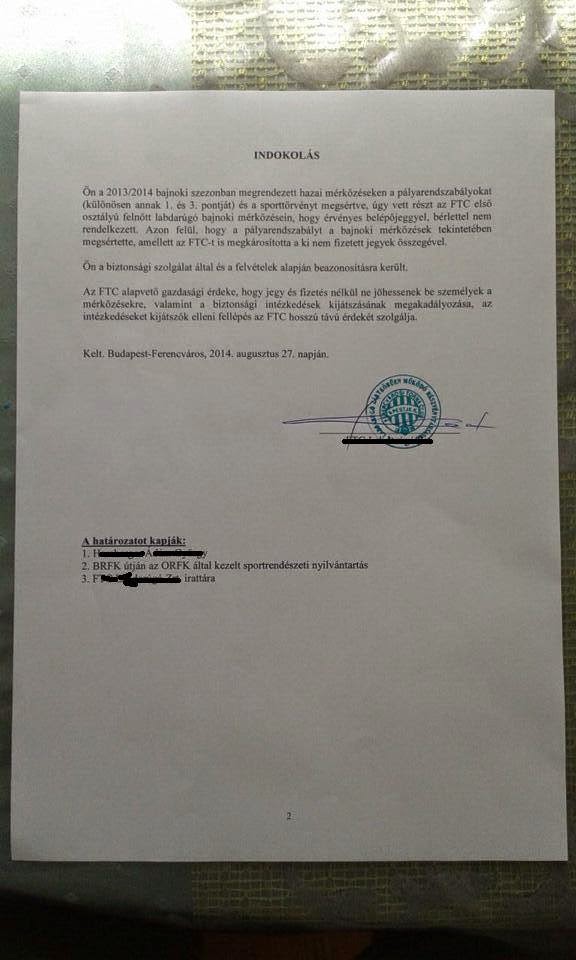 The UEFA fined the club with 20000 euros after the game against Sliema Wanderers. Kubatov wanted supporters to pay it, even they were not presented on that game (they were not allowed into the stadium, you can read about it). Ferencvaros appealed against the fine and won it so supporters did not have to pay it. Bans stayed active. But if UEFA said there was nothing so they don’t have to pay the fine why there are a dozen of people banned?

In Part One we wrote about „family visits” but let see how does it work. MLSZ, Kubatov and Hemingfuckingway also use that method. First of all they attack in different ways, reports against you in newspapers, bans then they threath your family, business,etc. Co-founder of FradiBusz were visited in his work, as they arrived to the shop they sent out his girlfriend then they asked him about his behaviour and problems about the new security system. Told him that they could come and destroy his shop without problem after that little talk they left the shop.

The game was held int he new stadium of Ferencvaros, security take out everybody who was member of Carpathian Brigade (Ultras of Hungarian National Team), who wore Supporters without privacy shirts, who did not want to sit down, who wanted to sing while standing. 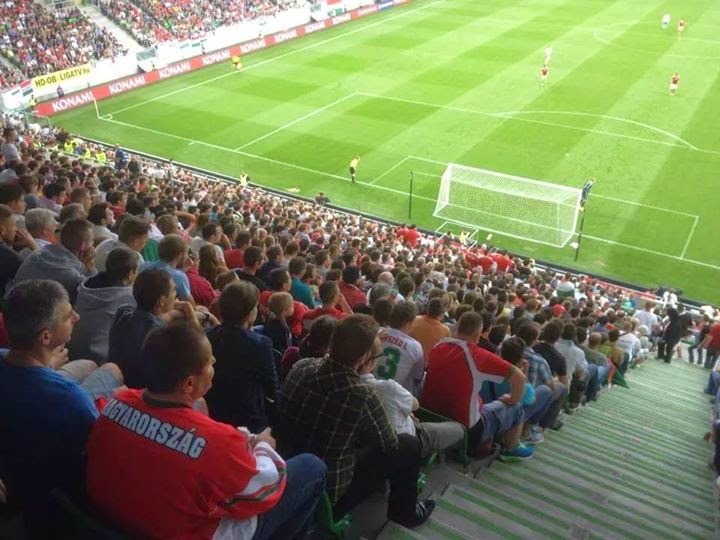 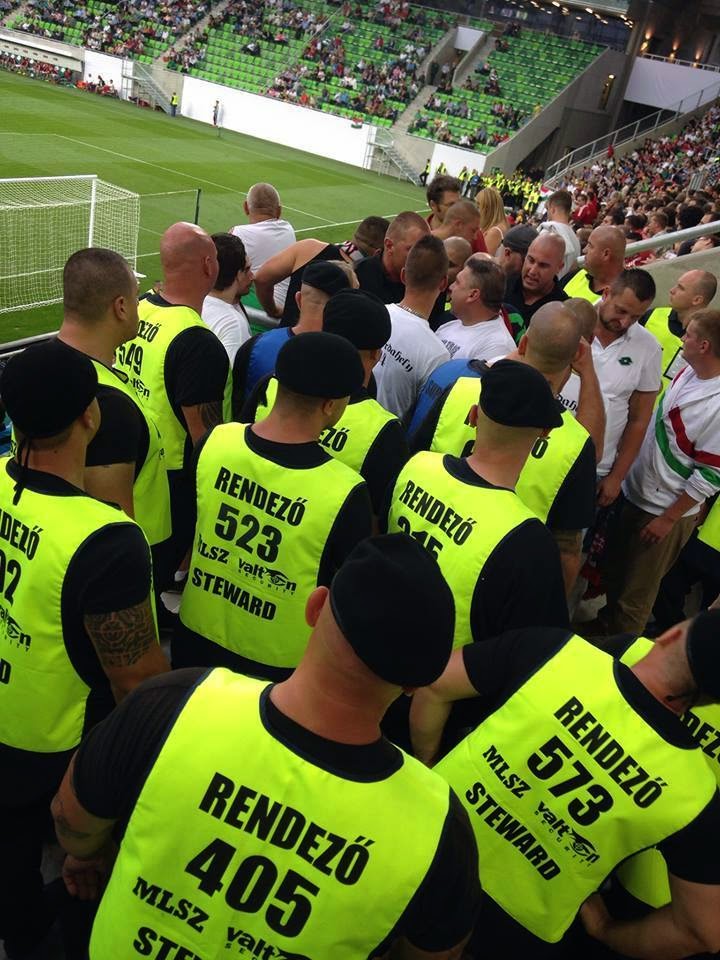 Few days ago Ferencvaros played against Vecsés in Hungarian League. The game was in Budapest and only 69 registrated supporter of Ferenvaros came to the match. These people faced two things, the security waited for them with all of their names on a paper and the real supporters of Ferenvaros were in the sectors of Vecsés. 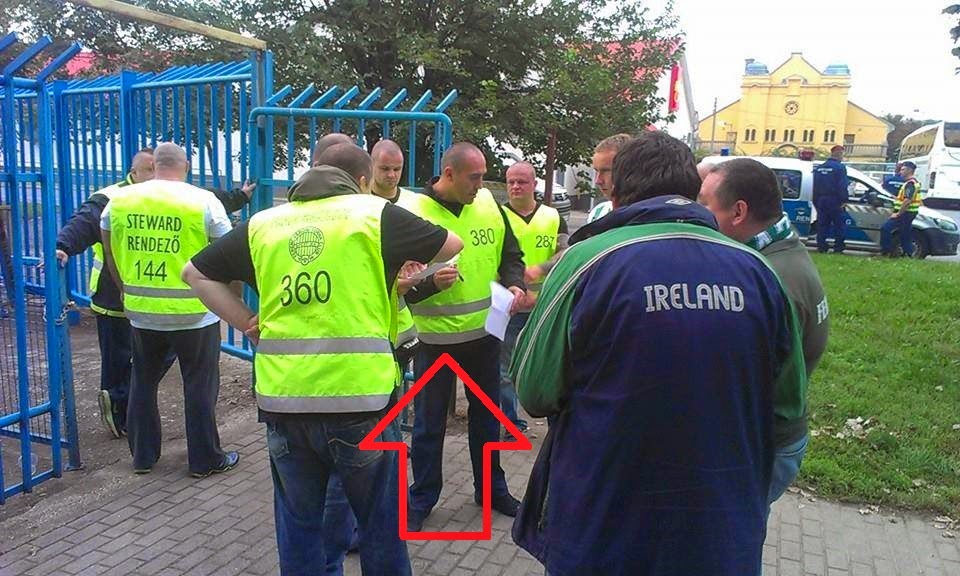 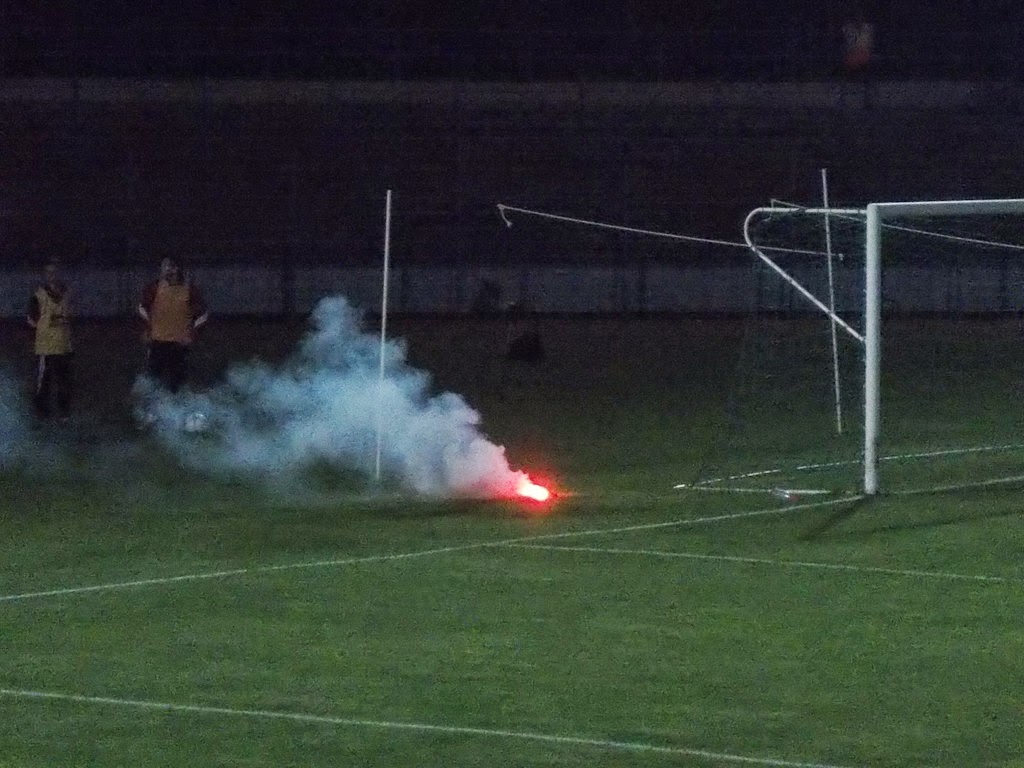 ltras Ferencvaros were in the home sector with 800 of them, thanks to the leadership of Vecsés. Ultras told them they wil support without any trouble. However a men of Kubatov went to the real ultras and dropped a firework into the pitch.

( from 19:05 )
In this video you can see that the capo of Ferencvaros went for the troublemaker. He was arrested later and the shameful action of Kubatov went public. 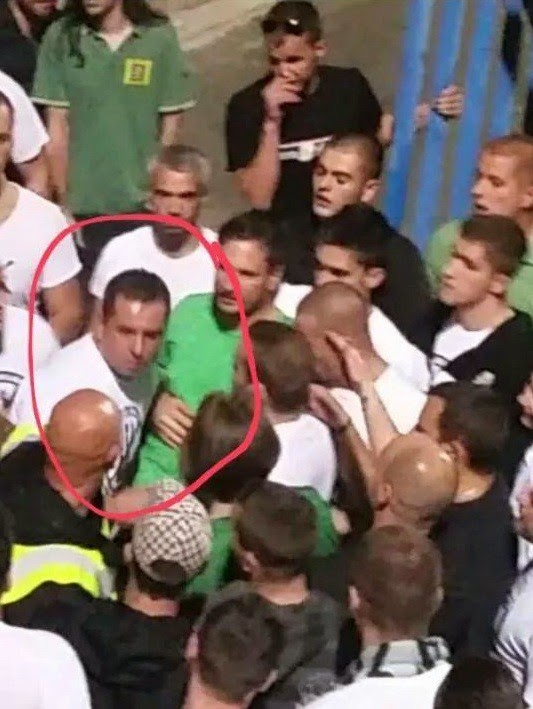 Facebook page of Green Monsters (leading Ferencvaros group) was deleted also the site of Ferencvaros supporters, Fradimob, was banned and deleted. Ferenvaros supporters will have a huge demonstartion ont he day of the derby against Újpest. Fradibusz system will work again and every group will follow the game on a projector. Everybody welcomed there.

By the way, from September 15th registration card will be needed on every hungarian game. I will write about it here.

Police banned all the home and away fans from this game. Noone knows why.

Videoton – Újpest
Online ticket saleing were not allowed because of „security issues” until one day before the game. So people could buy tickets for only one day. You could buy tickets only in Újpest, according to rumours police would not allow anybody near the stadium without tickets.

Meanwhile the group of paid supporters became active they are making choreos financed by the club and so on. The situation is very-very similar to the conflict between Mamic and real BBB. However Fradi Security agressive against the new supporters too, they attacked and humilited members of it. The final solution will be banning all the groups, even it is paid and financed by the club. There is a chance for many real ultras and hooligans can’t go to Romania if they will need registration card for it. It is a possible end, no ultras will go to Bukarest!

Let’s speak about other teams too.

Kispest Honvéd – I’m planning to write their stories too. But maybe it will be much longer then the case of Ferencvaros. First ultras of Hungary and first one who fight against the repression. They have such a fight for years, boycotting and supporting depending on their relation with the owner. Hemingway (jewish owner) rised ticket prices, banned them and so on.

Just to imagine the situation there is a new story about Kispest’s owner. There is a hungarian rapper who is also a succesful business man. He is a big supporter of Kispest, he also support it with money. For VIP you have to pay a lot of money which he did but security did not allow him to the VIP sector. He told that to the public and after that the president of Kispest attacked him in the media. Since then this supporter stopped paying for VIP benefits and called back four luxury cars he gave to the team for free use. One of the cars given free were used by Hemingway, the owner. That much idiot he is.

Thanks to the leadership of their club and registartion card, Ultras Kispest is boycotting.

Videoton – the team could make an agreement with MLSZ so their supporters don’t have to use the new card system. However ultras of Videoton thinks union int hat case the most important so they are boycotting too.

Haladás – also boycott against the new system but rumours says a couple lads joined their security. Situation seems not so clear.

Another manipulated video by MLSZ, the sound was edited! Old habits from communism I guess. Supporters of Diósgyőr will also boycotting.

I could list many other teams, almost everybody joining the boycott. It looks like Újpest won’t however a part of them is already boycotting and meanwhile their fight noone supported them. They have a good relationship with current owner who made an agreement with MLSZ so they don’t need cards for a while. Understandable.

Let’s end this report with a choreography from Nyíregyháza which shows the current situation perfectly. 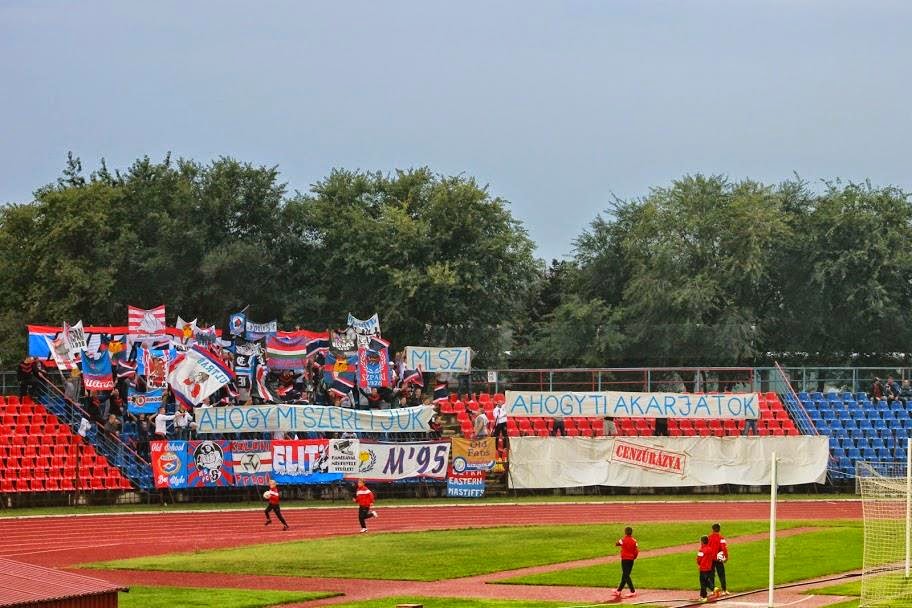 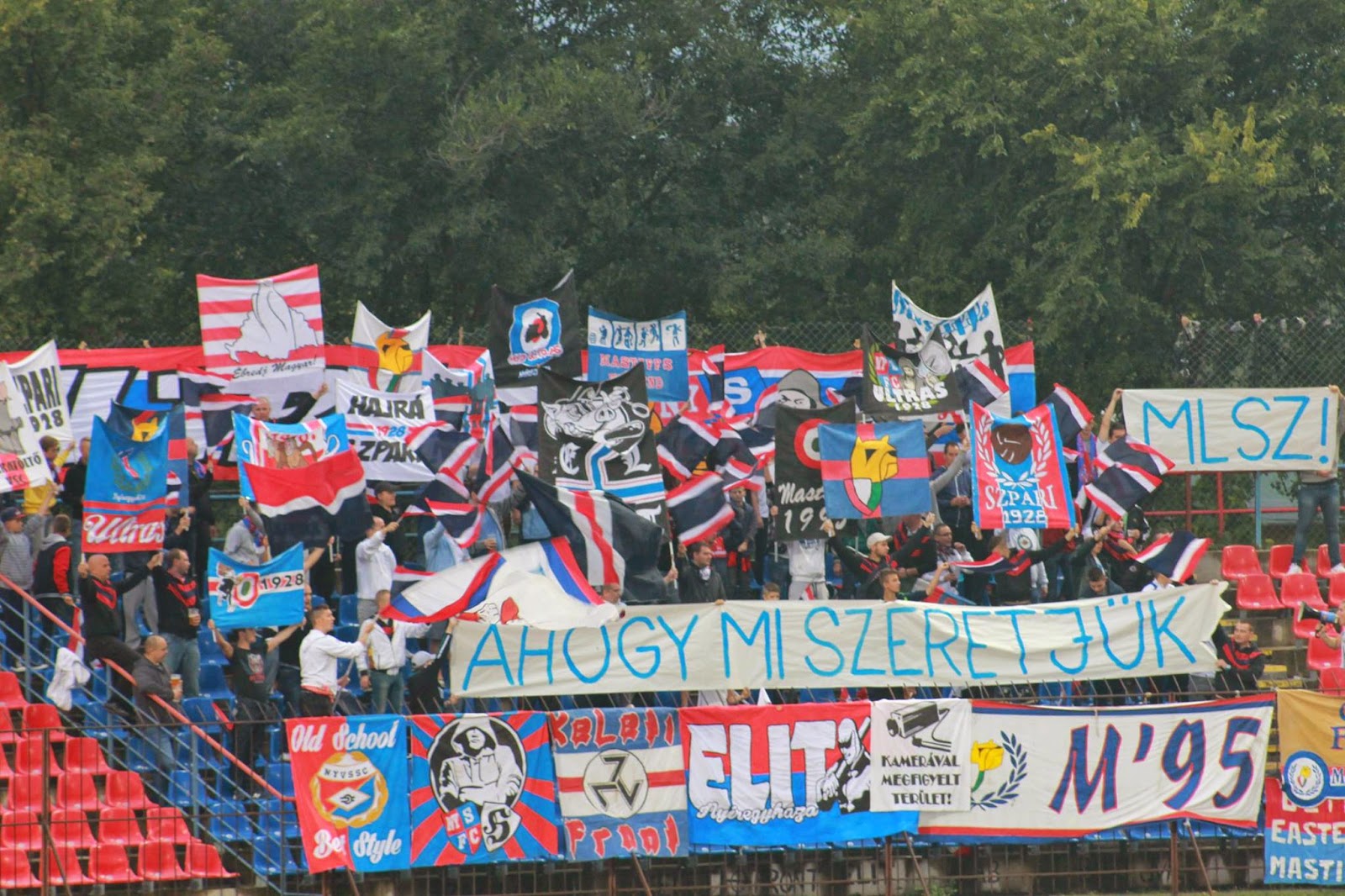 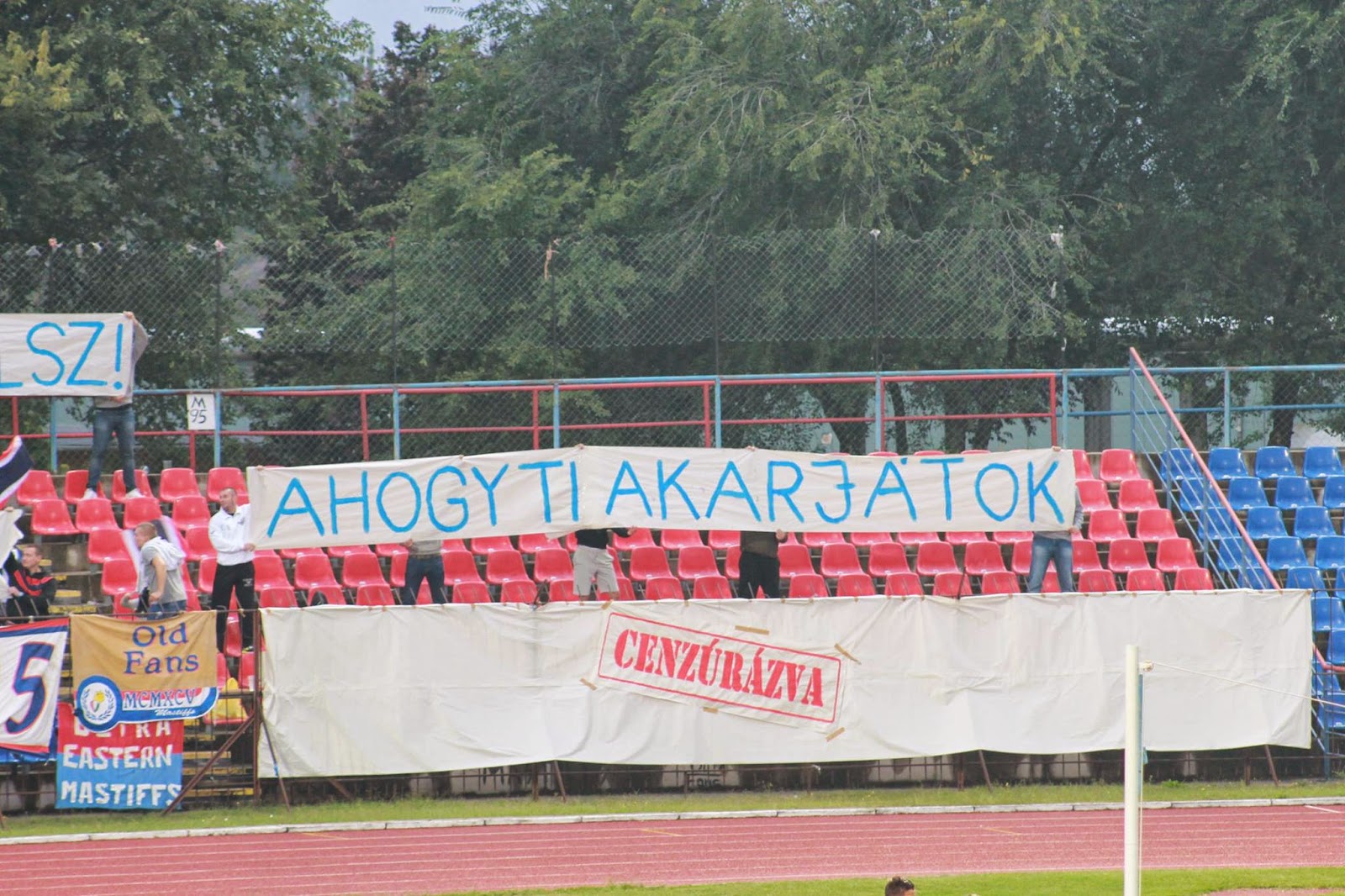 Article made by Hungarian Ultras Site