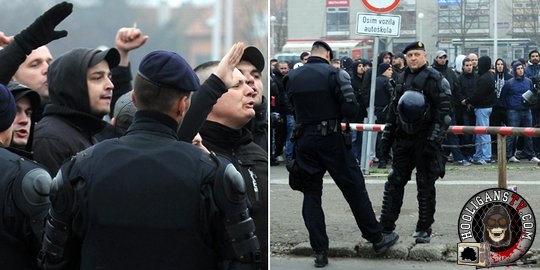 Croatia’s biggest football derby was scrapped on Saturday as visiting Hajduk Split refused to play against champions and league leaders Dinamo Zagreb after their fans were banned from entering Maksimir Stadium.

Around 50 of the 1,000 Hajduk fans who made the trip from the Adriatic coast were blacklisted as troublemakers and barred from entering the stadium, prompting the other fans to sympathise with them and boycott the match. Hajduk’s players followed suit and, in line with the regulations, the officials called the match off 15 minutes after Dinamo’s players came out of their dressing room.

Police all over Zagreb city before the derby. Cars and buses with Hajduk Split supporters stopped and controlled.

This is just one of many strange decisions taken by the Dinamo leader Mamic. For the last years he banned most of the members of Bad Blue Boys from attending their own stadium and away matches.